A downloadable visual novel for Windows, macOS, Linux, and Android

Your rival just bested you in a hacking competition. Were you going to be a sane person and let that slide? HECK NO! You hack into his database and leave him a little message, proving your superiority.

--but what's this? He's hacked you back?

Well, two can play this game.

some amount of play time? like 1-3 hours depending on how ur vibing

ability to hack into the dev's PC and change ur m00ds

frisghteining ability to make hacking look like a hangman puzzle

Playthroughs, fanart, reposts (with credits), and fan edits are encouraged! All soundtracks are made by us so you don’t have to worry about copyright.

For anyone who's having trouble with the game or want to know how to get the available endings, please refer to this document!

Asdfghjkllgfdghghj why is Micah so cUTE I'm gonna DIE

Micah made me feel special ngl. Saying this game is AMAZING is a massive understatement. I enjoyed it so much kinda sad its over but I  cant wait to try out other games you make!

is anyone having this issue where after they've downloaded the game the entire thing isnt actually downloaded? it seems like i downloaded a demo version or something. i've searched up playthroughs on youtube and the game seems to be divided into days but after the intro, mine skips straight to the ending

bruh was that.....a blooming panic poster? i love this even more now!

I already knew pigpen cypher so i just automatically wanted to solve what he said. i kinda want him more now so-

Reply
that little bee7 days ago

god.
the least i ask for is for the guy to climb up my window.
why? this game.
i'm absolutely in love with micah.

I'm going to miss his dorkyness!!! Thank you for this GEM of a game!!🥰

does this have a dyslexic font accessibility option?

theres a bug for android where it keeps crashing literally every five seconds and if you dont save you have to do everything all over again ;-; pls fix, other than that its frickin amazing

I SWEAR!! When i played the first time the game i actually choose my user as OnlyMe not knowing that there was a SONG with the almost same name, like, aaaa looked like he had played with words and put my user in the song aaaaaa

And actually my fav flower was Lily of the Valley ToT) (dont ask me why, idk why, i just like it)

Bonus: I blushed so much when i saw that my name was in the game and he really said it, i blushed even more seeing he say Amor, bc in my country it means Love, and is used like a affectionate nickname >w<)

Yes, it keeps getting BETTER and WIREDER and I love it Thank you so much for the excellent content Jenny Vi Pham sama!!!

omg i'm in love with this game... also just seen there's been a january update about 35 mins ago and i'm quaking in my boots rn, i can't wait to see what it's about :')

I listened to Kroh's error143 first and looped it for a long time. yesterday I saw this game with the same name on itch... I thought it was a coincidence until!!!!! the song suddenly played at the beginning of the game and my heart just jumped out of my chest! btw micah is so cute awwww

I LOVED THIS!! I got the good ending first playthrough, I cannot wait to see where this game goes :) great job

this game gave me sm euphoria omg like i cant explain it its like dhsjjsaishsiol i cant wait 4 more endings....i kept replaying this game because i could NOT stop smiling im so like im so uhe shyuwhgeuiklwkshgte7s8i wuey789w30pon 9s67siopaokjhwg HELP HES SO

love the game ! thank you to everyone who worked to make this game happen, the art, the music and the voice acting is just *chefs kiss*

also it's quite hard to handle micah's wittiness and cuteness, love the dude

honestly - i did bully the game a little bit on stream (out of love ofc), but i did notice so much effort put into the game!! (especially the easter egg - blooming panic folks? 👀)
loved the art work, loved the voice acting, loved the game play. story-wise, it was so quick!!! i didn't even realize nor see what was coming!! (sorry micah i couldn't handle the singing though i cringed too hard but it's all out of love)

everyone worked so hard, especially the artist!!! huge props to the artist!!! the voice actors!! the developers!!!
thank you all so much for giving us this wonderful game!
o(*￣▽￣*)ブ

made me cry when he started to sing it's one of the best story games, I played I can't wait for the other endings    :]

OMGOSH THIS GAME IS SO GOOD!! I'm enjoying it a lot so far!!

There was a bit of lag in my recording but I had a blast. I can't wait to record the next episode!!

Aaaaaa!!! I so loved this visual novel! Everything from the design, music, mini games, story, chatting, and so many more! I love Micah and how hilarious and adorkable he can be (also MC and him are a serious power couple, it's not even funny because they really suit each other which I adore so much). I love the Good Ending because goddamn it's so adorable it's giving me heart burn, especially when we see just how attached MC is (also sidenote, I love their set up, it's so pleasing) and just-- THE ENTIRE THING WAS SO CUTE I REALLY WANNA SEE HOW THEIR DATE AND LIFE GOES ON BECAUSE THEY'RE SO CUTE!!!

Also the Marriage Ending?? I was crying so much because at first I saw the "M" in the second word so I naturally thought "ME" and then my head autocompleted it to "FIGHT ME" because hello, they're rivals (oh my god they were rivals I can't) AND THEN MICAH'S ACTUAL CODE-- PLS HELP HE'S DOWN BAD FOR MC NOT EVEN A DAY LATER. I'M CRYING HE'S SUCH A SIMP IT'S SO HILARIOUS TO ME.

Oh and the animation at the start!! I love it so much to see so many artists all converging for one point and one point only, Micah Yujin. It's the cherry on top, seeing all their artworks and animation was so cool that I had a lot of fun watching it!

Aaaaa I'm rambling so much, anyway, I really enjoyed this visual novel and thanks so much for creating this boyyyy. Ya'll are so talented and amazing! Goodluck with the rest of the development and take good care of yourself~!!!

I'd love to go on a date with his sexy ahh 🤧

i believe in love again

Oh. My. God??? Micah is... Perfect? I mean, he's an annoying (annoyingly attractive...) little shit, but like - absolutely perfect? I'd kill to have a friend like this irl. Is it sad to be vibing with a fictional character more than with real people around you? Because I truly do. He's such a rare gem of a person. I've literally spent all my playthrough (playthroughS - there were many of them...) with a huge grin. Thank you so much for one of my new favorite games which I know I will come back to whenever I feel down.

such a lovely game! great art, story, vc, I mean this is truly a stellar piece of work. <3

I wanna cry 😭. So I download this then  play it but not few minutes later the game will crash and close on its own 😭😭 Is there a bug in the game?? 😭 (Android user)

Same hapenned to me TT^TT

U can try using steam version

yes i keep getting that too! it was working before? did u fix it?

happy new year Micah! I wanted to report something that has been happening to me, I tried to download the game 4 times for IOS on my Galaxy M13, but whenever I finish the download and open the game, a few minutes later it closes by itself, I don't know if it's my device or some error. Anyway, I love your game, I always watch his Gameplays!

Love this man and the game itself, 10-10 I recommend y'all playing this :') cause this man is so dorky and so loveable at the same time! <3 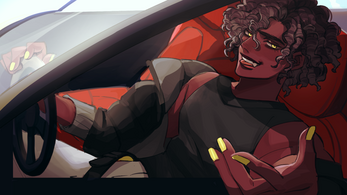 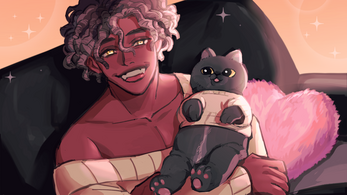 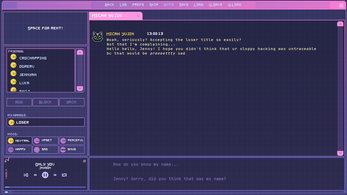 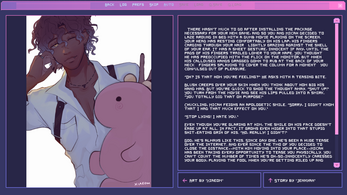 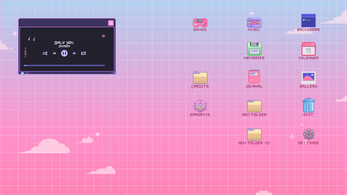