A downloadable game for Windows, macOS, and Linux

CONTENT WARNING:
There are very intense topics that are spoken about in this game including death, alcoholism, crime, and toxic relationships.

If you do, come join us at Lover's Anonymous where a heartbreak can become a full-fledged romance. 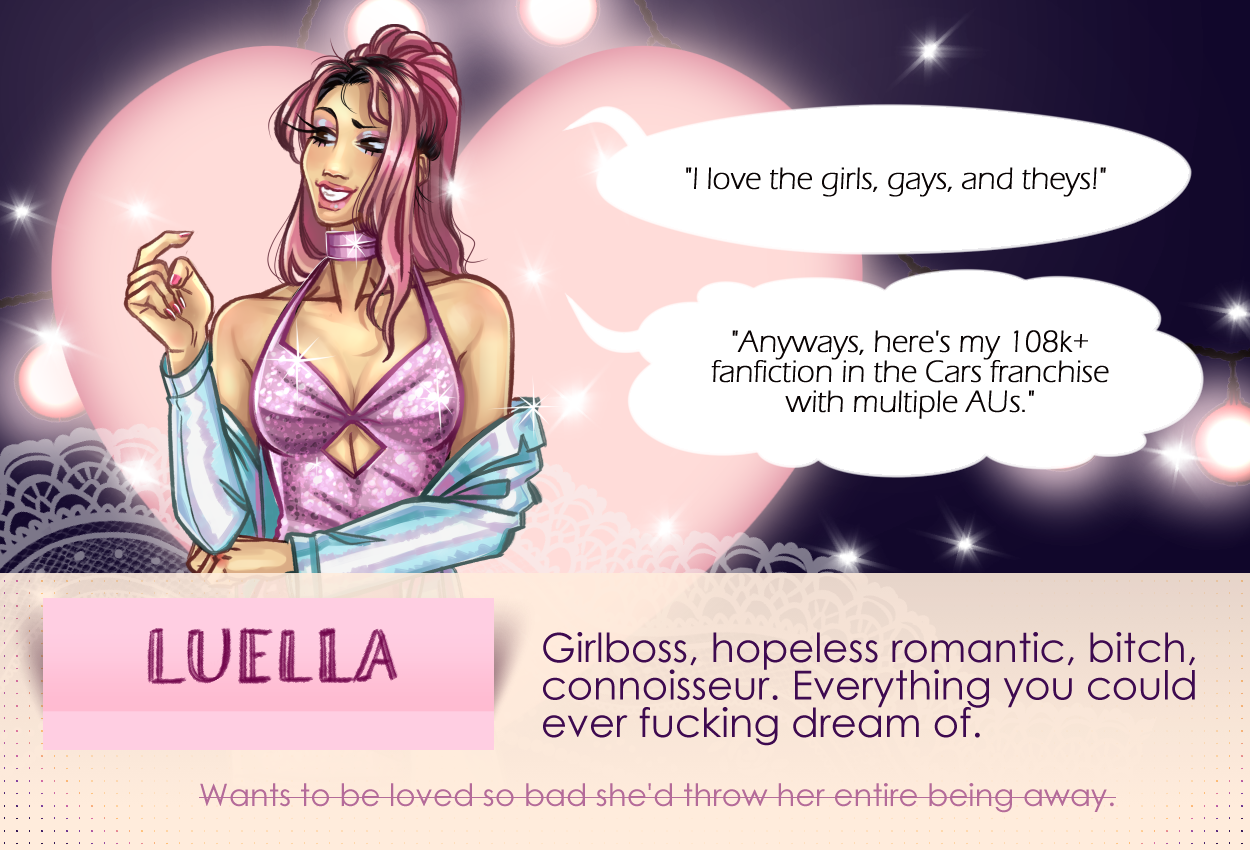 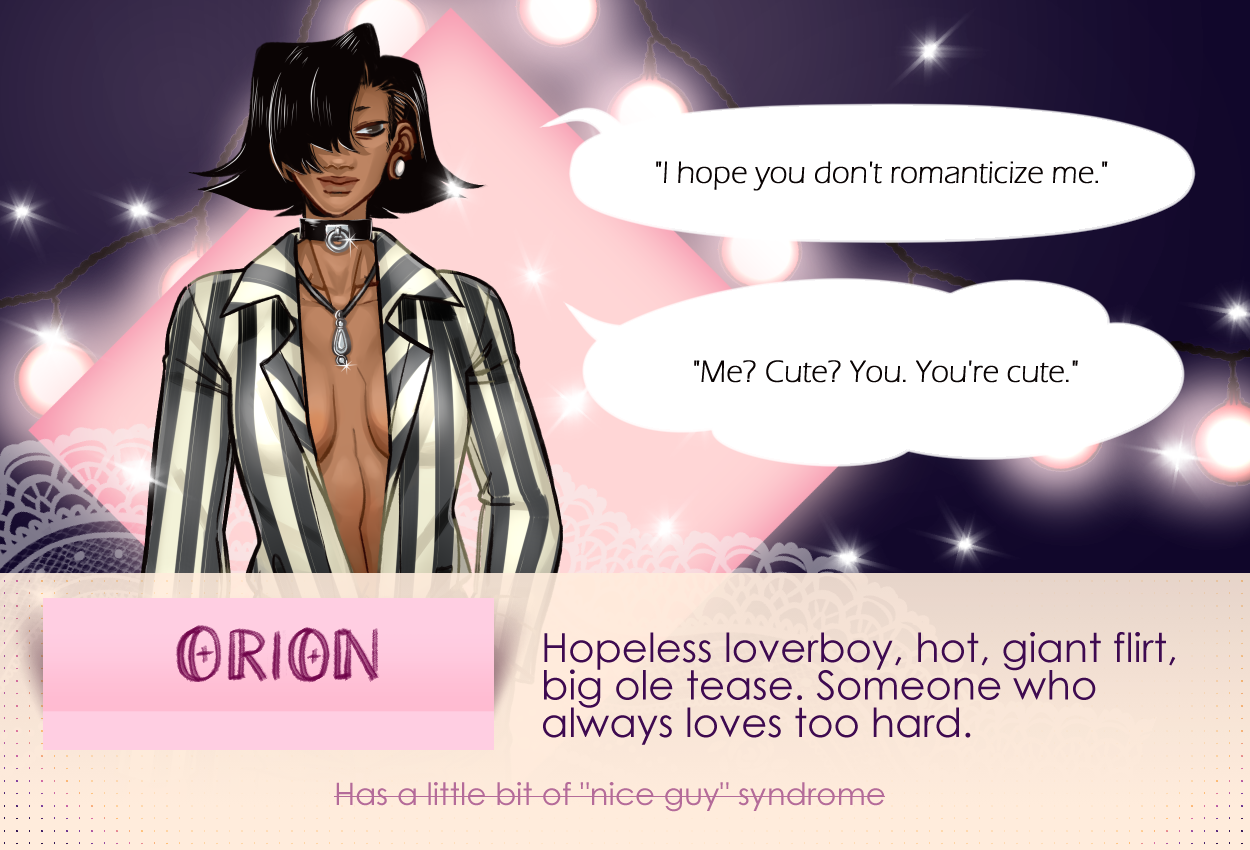 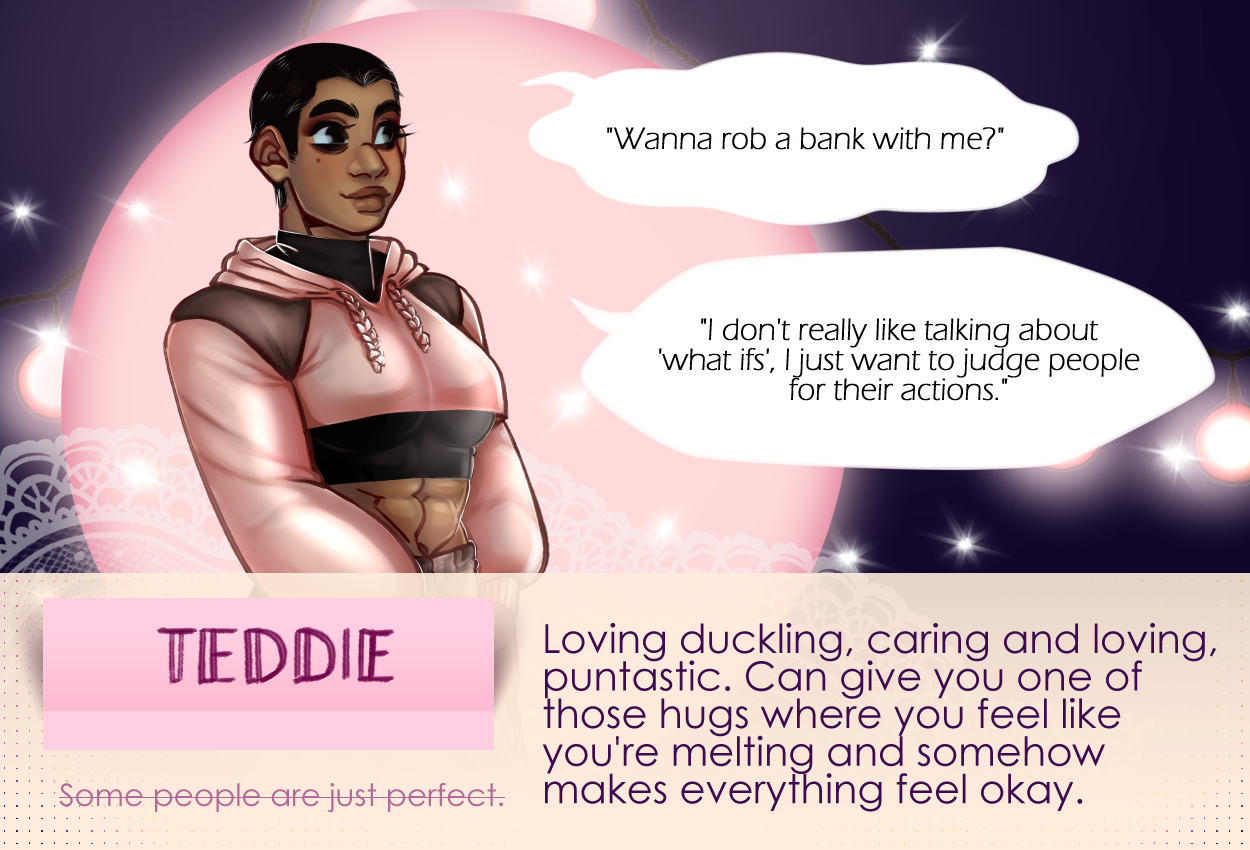 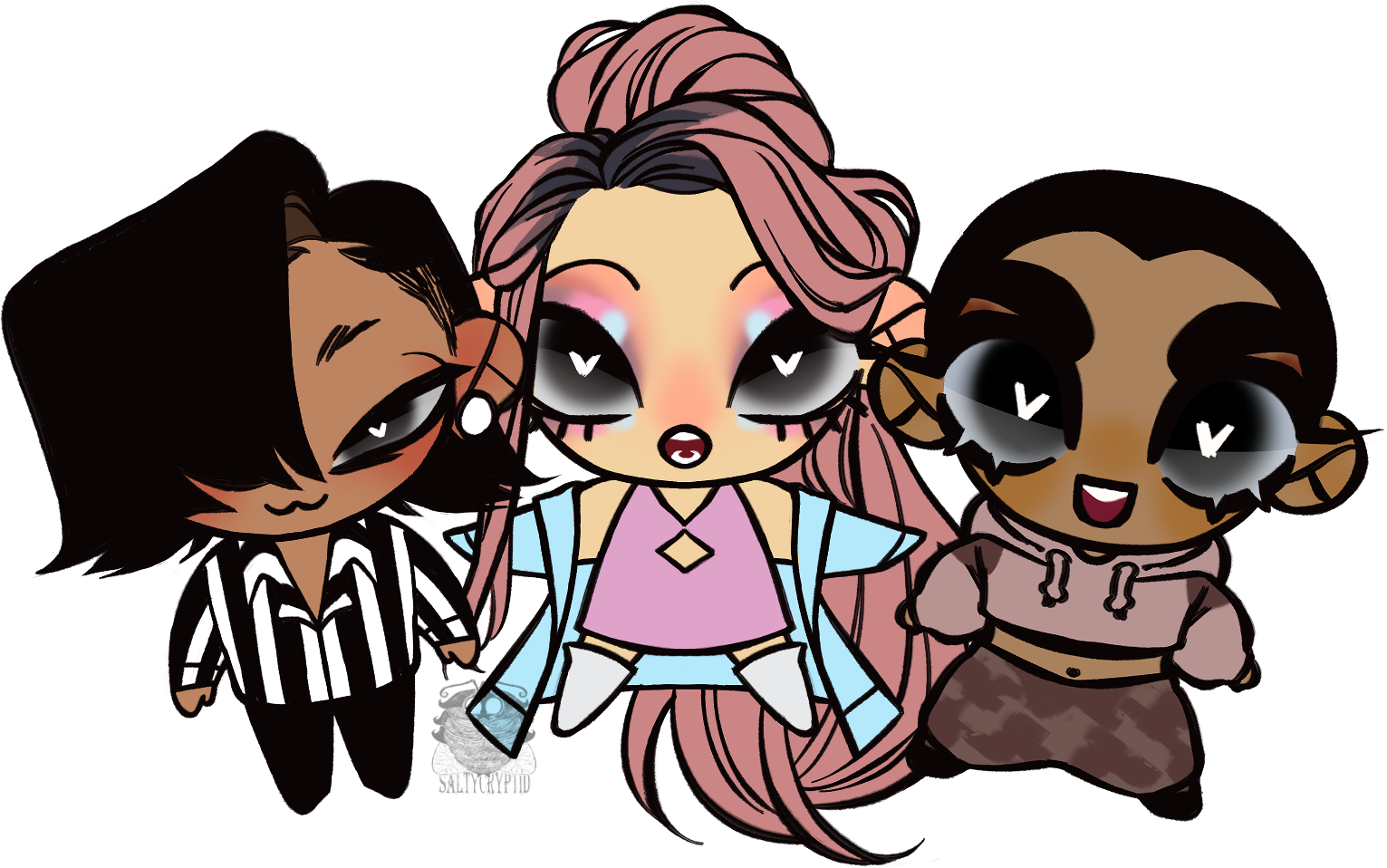 Beta tested and read by Niko!

i love this visual novel so much. everything about it just feels so real. i definitely connected with the characters, especially orion. i've dealt with something similar to that, and to say the least, it isn't pretty.it was nice seeing each one's perspective of love and how that influenced their dynamics. overall, love everything about this game, the art style, the writing, the character designs, etc.

this is literally on my top 3 best visual novels i've ever read!!!! everything is so so amazing and spectacular, the artstyle, the characters, the story, the background designs, everything!! as a feminist and a hot lesbian girlboss, this is EVERYTHING!!!! HOPE U MAKE MORE STUFF CAUSE AAAAAAAAAA SLAYYY

AWWW THANK YOU SO MUCH!!! AHHHH!!! I AM UPLOADING ANOTHER GAME IN AROUND A DAY!! HOPE YOU LOOK FORWARD TO IT!!!

This is a super self aware and fleshed out sim, not the typical fluff and stuff you usually get which makes it so great! Don't get me wrong, there were many moments where my heart dropped because as the content warnings list, there are some heavy themes touched in this. Love the art, characters and story, everything about it makes for a great game. Congratz on the release!

This is a positive review, but I HAVE to say: This vn is honestly not for the faint of heart. I think it's kind of hilarious because the comments so far barely suggest this and I was sorely underprepared to read some content to the extent it was described in front of my friends. I had to pause several times during the nonfiction review bit of the game to not overflow with tears and genuinely break apart. It can feel like you are experiencing trauma after trauma and your only recourse is to keep going or turn away. The additional warning updates were added after my read, lol.

That said, I'm grateful for the experience. There's a deeply haunting kind of introspection from the characters in a way I would not have expected, mainly because everyone's characterization is as regular people, so you do not see it coming. But it touches on beautiful things in the attempt to reconcile these deeper problems. Teddie's hit way too close to home for me in several ways, so I can't properly praise it (though it deserves praise), but Orion's story had such a revelation during the [SPOILER START///] Alcoholics Anonymous in which they pretended to be an alcoholic and made their troubled girlfriend's stories their own [///SPOILER END] that I honestly can't get over it (in a great way). It's brilliant. (Does leafo not have spoiler tags yet? Jesus.)

I'm grateful that Luella's story was told, and that I didn't find it as intense (a much-needed break) but it was incredibly relatable.

Anyway, for a little critique, the writing at times feels rough and could do with some polish and flow, maybe some tone adjustments here and there from Nate and Luella or a little more clarity. At times it felt like Luella's reactions were disproportionate against specifically Nate up until he said what was for me anyway a mildly-infuriating line (the "crazy" bit, which anyone who says this gets what's coming to them) and  approached. I couldn't tell if the intention was that Luella is meant to be this disproportionate considering her infatuation addiction is also an extreme, so anything shy of that is grounds for aggressive monologue? If Nate was more outwardly a cocky dumpster and the boys were more heckling, I'd get it more.

Ultimately for a one-month jam game, this was wonderful. I will not be revisiting this any time soon, lmao, but these stories are now with me. Also I love loving petty crime.

I love how in-depth the characters are, their way of approaching and making sense of themselves. I can see some of yourself in the writing, in Luella and the art is beautiful. I was playing Orion's route and thought to myself...wait a minute that voice is familiar lmao But honestly, amazing work <3 Figuring ourselves out, knowing what we love, what we can learn and tackle past relationships I love how that has been fleshed out and explored here And the idea of love/relationships yes yes Anyways, beautiful work team!

Playing through this VN was a really fun experience! Even if some parts of the writing aren't really my vibe I enjoyed it a lot. The art is GORGEOUS and despite it being such a short game you can tell the characters have a lot of depth, especially through their writing pieces! Props to the team!

I'm glad that you enjoyed it!

I played this while streaming to friends, and we had a great blast playing! The writing and the characterization is so goood, and the art is so amazing! I was even pleasantly surprised at the Poly route (/furiously typing while gushing since I can't out loud).

Thank you all for making this!

Edit: okay i forgot to add this but hOLY HELL THE CHARACTERS FELT SO REAL THAT WE ALL WENT "just like me fr" WHILE STREAMING LMAO KJAHSKJHAKJCH but yes !!! and also i love the jabs at capitalism

Thank you for playing!

I love this game!! Just backed on Kickstarter!

Thank you so much! We really appreciate it! <3

This is such an AMAZING game! The writing in it is SO EXTRAORDINARY and the art is SOO GORGOUSE I LOVE IT SO MUCH!! Teddie is my beloved but AARRRGHH THEY'RE ALL SO HOT! LUELLA IS SUCH A GIRLBOSS AND I LOVE HER! THE VOICES ARE AMAZING AND THE CGS ARE MUAH MUAH MUAH!!! ABSOLUTELY AMAZING WORK!!!!

I love how much personality the characters have!! Many of the things they said resonated with me. It has a good balance of sadness, romance and wholesomeness!! <3

I was scared of just being like: HEY GUYS! HERE’s SOME FREE TRAUMA 😍

If youre queer and romantic then definitely check this game out :D The game has both great art and an emotional story :)) If youre into graphic novels it'll be worth your time. Would recommend :)

Thank you for playing!

I can honestly say that I'm pleasantly surprised by this game. The beginning started off rather angsty but as I played more the writing invoked introspection into what love means to someone and also values & self worth. Definitely worth at least one play through :). I might go back and see what an alternate ending looks like.

I honestly don't think that the description does this game justice. The characters are so unbelievably three-dimensional. They have strong lines and personalities.

Although the block of text may seem a little harsh on the eye, it is SO SO SO worth reading. Some quotes that I especially loved were (lol sry I'm a nerd):

"I don’t give people second chances. I’ve been burned in the past. I have a hard time letting go of the past. Nostalgia is my drug of choice."

"I want to believe that magic exists somewhere. I’ve looked for it at the bottom of bottles and in people’s hands. I don’t know how to let go."

"She is a part of the way that I write, she exists in the blank spaces between these words.

Also, the characters look so so good and the CGs are immensely satisfying. Teddie is...amazing. Also, the beginning is kind of hard to get through, I'm not going to lie.

HHhhh!! Thank you this means a lot to me!

Absolutely love the writing in here. All the characters are so different, and yet they all feel super fleshed out. I feel a lot of the time that dating sims make characters one-note personalities with a face, but this one definitely doesn't.

I love reading the essays! Luella's little comments in the docs were funny and relatable compared to the somewhat deep/dark words she was underlining. It was hilarious.

The writing in this game is phenomenal. Mad props go to the writer. 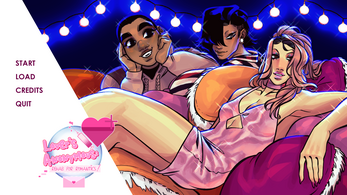 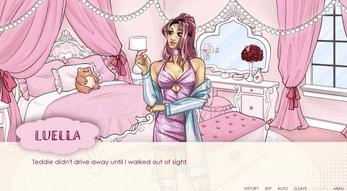 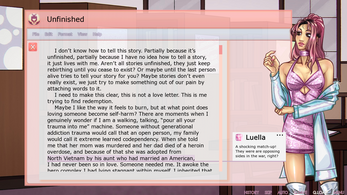 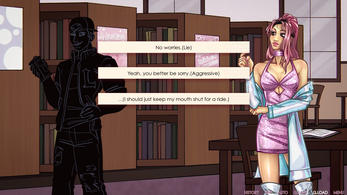